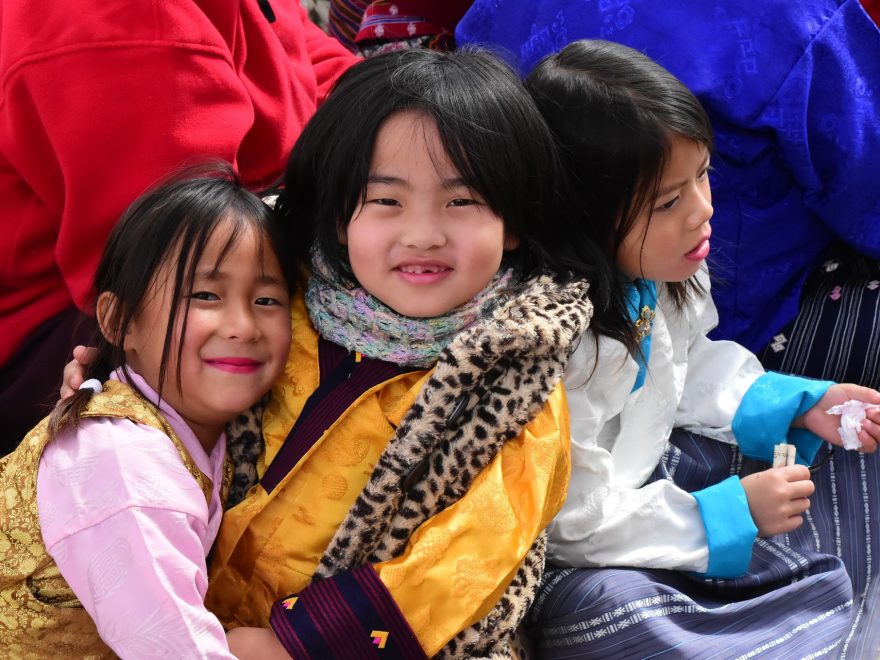 Bhutan is a land locked country between India, Tibet, China, and Nepal located in South Asia. Situated deep in the eastern Himalayan mountains, Bhutan is often overshadowed by its more prominent neighbors. But, despite its quiet status, the country has constantly made headlines for a variety of socioeconomic achievements. For instance, Bhutan is the world’s first and only carbon negative country – it removes more carbon dioxide from the atmosphere than it is responsible for creating. Bhutan is also know for its concept of Gross National Happiness (GNH), which will be the focus of this article.

The Four Pillars of Bhutan’s GNH

As part of an effort to make the country one of the happiest in the world, the nation’s king Jigme Singye Wangchuck, developed something called Gross National Happiness. The phrase was first coined in 1972 when the king declared, “Gross National Happiness is more important than Gross Domestic Product.” The concept implies that sustainable development should take a holistic approach towards notions of progress and give equal importance to economic and non-economic aspects of wellbeing (1).

The GNH Index includes both traditional areas of socio-economic concern such as living standards, health and education and less traditional aspects of culture and psychological well being. It is a holistic reflection of the general wellbeing of the Bhutanese population rather than a subjective psychological ranking of ‘happiness’ alone. The four pillars of GNH mentioned earlier provide the foundation for happiness, which manifests in the nine domains of the GNH namely: Psychological well-being, standard of living, good governance, health, community vitality, cultural diversity, time use, education, and ecological resilience (1,2).

Bhutan has experienced impressive growth in the past four decades and is said to be next in line to graduate from the Low-income Developing Countries (LDC) category in 2023. Bhutan has recorded an average growth in annual GDP of 7.5% since the early 1980s and poverty levels have declined from 36% in 2007 to 10% in 2019. Bhutan has also made considerable improvements on environmental, social and governance indicators in the past two decades. Among some of the country’s green policies is the law that sixty percent of the landmass must be conserved and protected as forests as listed in the constitution. Seventy two percent of the landmass is currently covered in forests and the country has banned export logging (1). Bhutan also maintains its conservation efforts by offering controlled, low environmental impact tourism which includes charging all visitors sustainable development fees. Bhutan also accounts for the most trees planted per hour. According to the Proudly Carbon Neutral, the country emits around 1.5 million tonnes of carbon annually and absorbs about 6 million tonnes due to the forest’s carbon sink. All conservation efforts go towards achieving Bhutan’s goal for net zero greenhouse gas emissions and zero waste by 2030 (3).

The Brand Bhutan was created with the aim of diversifying the country’s exports while recognizing the small size of its domestic market. The idea is to target high-end markets with specialized exports of high-value, low-volume Bhutanese goods. Their goods come from sectors of the economy including textiles, tourism, handicrafts, culture, and natural resources. The government has joined other development partners in supporting this programme, including the Enhanced Integrated Framework and the International Trade Center. Countries with a comparable restriction on large-scale production can look at how to tailor their domestic goods to niche but upscale markets in order to make up for their lack of scale economies.

Landlocked nations like Bhutan can benefit from digital transformation to overcome their geographic disadvantage. This region has great promise because Bhutan has affordable access to basic infrastructure like power and the internet. Thimphu TechPark, which opened in 2012 and currently employs 600 people across 19 largely international enterprises, is a modest but admirable accomplishment that should be replicated elsewhere. Through the promotion of enterprise development in the ICT sector, greater ICT workforce skills, and expanded access to finance, the TechPark increased productive employment in Bhutan. After completing its eTrade Readiness Assessment, the nation quickly put several suggestions into practice, including the creation of an ecommerce policy by 2020.

Bhutan raised $12 million in impact investment in 2015 for mountain hazelnuts, a social venture created to promote hazelnut production by hiring smallholder farmers around the nation. The project is anticipated to have a significant development impact on the livelihoods and income of smallholder farmers by connecting tens of thousands of farmers to markets, creating jobs and developing skills, and increasing women’s participation in the job market. The initiative is also anticipated to help Bhutan restore its damaged landscape, reduce rural-urban migration, reduce greenhouse gas emissions, and preserve forests. Because of the inevitable reduction in official development assistance, including Aid for Trade, as well as the need to simultaneously create a thriving business environment, exploring innovative financing options like blended finance and impact investment is becoming an increasingly attractive option to finance economic growth for all countries.