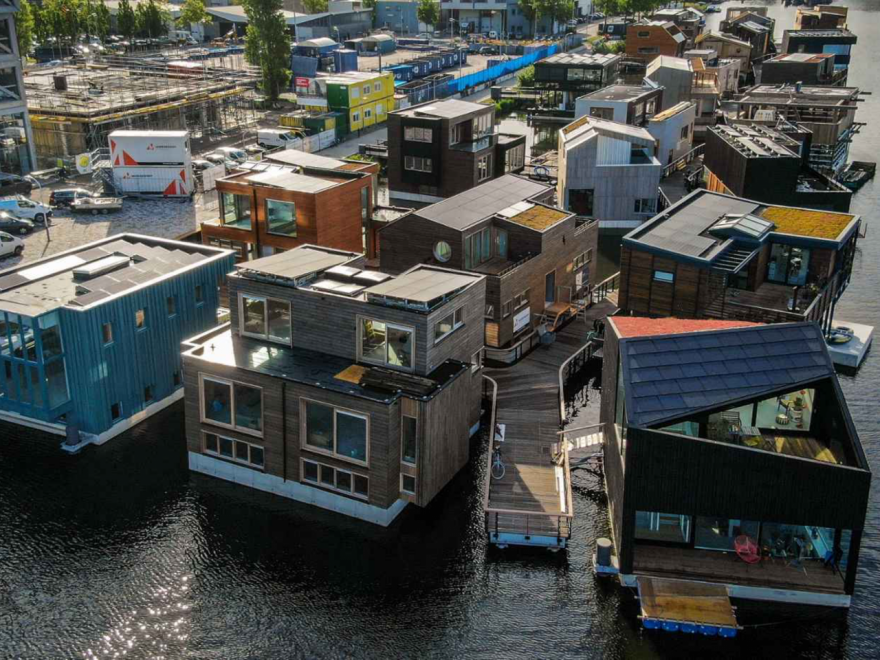 One of Albert Einstein’s famous quotes says, “In the middle of every difficulty lies opportunity”. While climate change presents mankind with unprecedented difficulties, we can choose to seize the many opportunities that lie in the challenges that result from climate change. The Dutch are doing just that by turning to floating houses as a means of adapting to the negative impacts of climate change.

An Opportunity in Every Challenge

One of the most prominent consequences of climate change is the increased risk of more frequent and more severe floods. This increased risk of flooding is particularly important for countries that lie below sea level such as the Netherlands. Almost half of the Netherlands lies below sea level, and densely populated urban areas such as the capital city Amsterdam are found in this part of the country [1]. This, in addition to the fact that the country is relatively flat, has always put the Netherlands at a high risk of flooding in the event of high tides and severe storms. But today, this risk of flooding is made even greater due to sea level rise resulting from climate change, and other factors such as urbanization and land subsidence (sinking land surface) [1].

As sea levels rise in this land-scarce and densely populated country, the Dutch have chosen to seize the opportunities that lie in this challenge by exploring building houses on water instead of land, hence the name floating houses.

“Instead of seeing water just as an enemy, we see it as an opportunity.”

Arnoud Molenaar, chief resilience officer with the City of Rotterdam.

Floating houses in the Netherlands are typically square-shaped, three-story townhouses made with conventional materials like timber, steel, and glass, which float on water. They are designed to adapt to rising or falling water levels. They are typically prefabricated offsite, and moved to a floating concrete foundation, and fastened to flexible mooring posts on the shore which enable the houses to keep floating when water levels rise. The concrete foundation acts as a counterweight to maintain the stability of the house in the water. While most of these houses are connected to public utilities, some are made to be self-sufficient with minimal impact on nature. Schoonschip – a neighborhood in Amsterdam, possesses floating houses which are designed to be self-sufficient with green roofs, solar panels and heating pumps, and these houses are intended to convert their waste water into energy.

You might be wondering how floating houses differ from house boats? Typically, floating houses are meant to be moved just once when fixing them to the shore and they often rest on steel poles, whereas house boats are designed to be easily unmoored and relocated.

Floating houses present a number of benefits. They are effective in dealing with floods, and this is particularly important given climate change induced rising sea levels, and the growing number of disastrous storms seen around the world. Floating houses can be useful to enable coastal communities to adapt better to the impacts of climate change, while meeting their housing demands.  Living on water can also attenuate the impacts of heat waves in the summer, and may improve the quality of life of residents who like to live on or near water.

The Future of Floating Houses

There is growing demand for floating houses in the Netherlands. In addition to meeting housing needs, floating buildings are also used for other purposes in this country. For example, the city of Rotterdam which is the site for Europe’s largest port and is largely below sea level, now hosts the world’s largest floating office building, a floating farm, and a floating pavilion used for meetings and events. These growing floating communities in the Netherlands are inspiring the development of similar projects in several other flood prone nations with limited buildable land starting from neighboring European countries such as Britain, to further countries such as the Maldives and French Polynesia.

While floating houses are increasingly presented as a sustainable solution for climate change adaptation, urbanization and land scarcity, a key existing knowledge gap on this topic remains. This knowledge gap relates to the ecological impacts of these houses. Basically, what are the short and long-term impacts of these developments on the quality of water and biodiversity? While a research study conducted to measure the impacts of a few floating houses in the Netherlands concluded that the water quality was not critically affected by these floating houses [2], there is vital need for more research studies to address this knowledge gap before the large-scale development of this concept.

Save
No Thoughts on Climate Change Adaptation: The Dutch Turn to Floating Houses