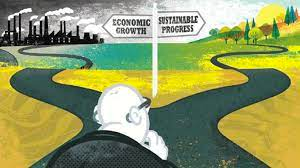 Degrowth is not a single discipline nor does it have a single definition. It functions as a social movement, political undertaking, and intellectual paradigm all at once. These pursuits are related by a desire for a sustained, and peaceful coexistence of man with nature, with other living things, and within humanity, including oneself. The term “degrowth” refers to a critique of the dominant economic growth perspective, which ignores the detrimental impacts of seeking economic growth, such as environmental and social degradation (Nesterova 2022).

Degrowth, despite its name, is not anti-growth; rather, it promotes, supports, and encourages growth primarily in non-material areas, such as caring, solidarity, empathy, creativity, generosity, and connectivity. Degrowth primarily refers to the elimination of economic growth as a social goal. This suggests a new trajectory for civilization, one in which people will live in different ways and use fewer natural resources than they do now. According to ecological economics, degrowth is a fair scaling back of production and consumption that lowers the amount of energy and raw materials that societies use (Nesterova 2022). However, the change should not just result in a reduced social metabolism; it should also, and more crucially, result in a society with a metabolism that is distinct from the previous one and performs new roles.

The History of Degrowth?

At the turn of the year 2000, criticism of the notion of development and limitless economic expansion  ideology  were the driving factors behind the degrowth narrative. The influential writings of French economic historians served as a catalyst for the public discussion on the paradoxical nature of the term “sustainable development” (Nestrova 2022; Anon n.d). Their criticism challenged the dominance of endless economic growth as humanity’s only hope for the future in the public discourse(Anon n.d.). This viewpoint aimed to disrupt the instinctive association between “growth” and “improvement” by using the phrase “degrowth”.The term “décroissance” (French for degrowth), and with this the associated notion, can be traced back to 1972 (Anon n.d.). The publication of “The Limits to Growth” in the same year prompted a wide debate, during which the word “décroissance” was frequently used in France.Today, the rhetoric in mass media and politics frequently reinforces the public’s association of growth with an improvement in well-being, despite mounting evidence that in developed countries this is no longer the case.

Why Does it Matter?

Technological innovation started driving increased prosperity during the industrial revolution dating back to the 17th and 18th centuries.Government policies have focused on growing and expanding economies ever since. However, unbridled growth appears to be at odds with social well-being and environmental sustainability. Poor mental health, lengthy workdays, environmental degradation, and pollution are all expenses associated with expansion. Although GDP may still grow, since the 1970s, welfare metrics have remained static in the majority of developed economies (Fanning and O’Neill 2019). Further development does not boost happiness after a certain point. This is due to the fact that extra individual income is being used to purchase positional goods once fundamental material necessities have been met. In a study conducted (Fanning and O’Neill 2019), the researchers examined the “health-income paradox”  to explore the complementary relationship with well being. Results showed that the average happiness level is significantly lower in nations with declining per capita spending, as assessed by either GDP or carbon footprint. In contrast, nations with rising per capita consumption do not experience a material shift in their level of happiness. Whether the GDP or carbon footprint are expanding or not, there is no correlation between changes in per capita consumption and health.Therefore, in modern countries, income equality, rather than growth, is what enhances social well-being (Fanning and O’Neill 2019).

Degrowth is a conscious set of policies designed to optimize human and planetary wellbeing while minimizing inequality, poverty and environmental harm.It is a recognition that “more” does not always equate to “better” and that happiness is not a result of economic prosperity. Degrowth recognises that economic growth in primarily western countries has disproportionately harmed developing nations and the planet’s ability to support life, to the point where we are now on the verge of an environmental catastrophe (Anon n.d). It advocates for a future in which societies adhere to ecologically sound practices. Furthermore, it appears that infinite growth is completely at odds with what we currently understand from scientific literature about the limited supply of resources and the  ecology that is necessary for our survival (Fanning and O’Neill 2019; Jackson 2009). Although the scale of the world economy has increased by almost five times since 50 years ago, an estimated 60% of the planet’s ecosystems have already deteriorated as a result. Most planetary boundaries will eventually be exceeded with continued global growth, including the carbon concentration in the atmosphere that would result in catastrophic climate change. The development of cleaner technology and the transition to services might theoretically decarbonize the economy and dematerialize it. However, with 2-3% global growth per year, the degree of decarbonization and dematerialization required to meet the global target of 1.5 degrees is next to impossible (Jackson 2009).

The Essentials for Degrowth Include (Anon n.d.) :

Glocalization, to put it simply, is the opposite of globalization since it encourages the celebration of many cultures and habitats to enhance life and biodiversity. As a result, open relocalization effectively counteracts the reactionary protectionism of capitalism’s closed borders and racial prejudice.

Save
No Thoughts on Degrowth: The Need for a New Economic Paradigm