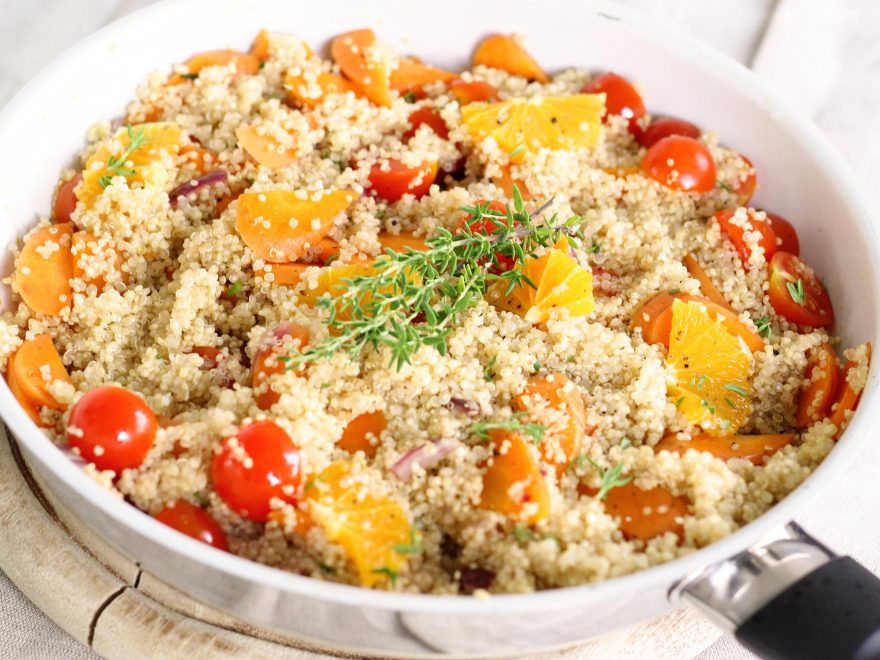 Quinoa, alongside other foods such as nuts, berries, leafy greens, legumes, avocado, chia seeds, moringa, etc, are often referred to as “Superfoods”. You might be wondering why they are called as such? While there are no standard nutritional criteria used to classify a food as Superfood, this term is often used to refer to natural foods that are nutrient dense, in other words, foods that offer maximum nutritional benefits for minimal calories. In addition to their nutritional value, these foods are often associated with the prevention of a disease, or believed to offer numerous health benefits such as enhancing the immune system, improving heart health, preventing cancer, reducing inflammation, lowering cholesterol, etc.

In recent years there’s been a significant increase in the prevalence of foods labelled as “Superfood” in North America. While certain foods are genuinely healthier than others, the term “Superfood” appears to be increasingly used for marketing purposes in the food industry in order to boost sales. Numerous consumers purchase foods as a result of such labels as they perceive them to be healthy. The health benefits of these foods are often emphasized, while little is often known of the socio-economic and environmental impacts of their production and consumption.  In this article, we will be taking an in-depth consideration of quinoa, a common Superfood, highlighting the health, socioeconomic, and environmental implications of its production and consumption.

Quinoa is actually a seed that is classified as a whole grain hence the term “pseudo-grain” used to describe it. It is indigenous to the Andean region of South America, specifically Peru, Bolivia, Ecuador, and Chile, where it has been cultivated for several generations, and only became popular in North America in recent years due to its health benefits. Quinoa is a good source of plant protein and fiber, and is low in fat. Quinoa is a complete protein, meaning that it contains all nine essential amino acids that our bodies cannot make on their own. Its unusually high protein content compared to other plants makes it a healthy alternative to a carb- and meat-centered diet, and consequently, very popular among vegetarians and vegans. Quinoa is also gluten-free, and a source of manganese, calcium, phosphorus, magnesium, folate, thiamin (Vitamin B1), and anti-inflammatory phytonutrients which can prevent disease.

The health benefits of quinoa, coupled with marketing campaigns from food industries, and the power of the internet to spread information faster, have contributed to tremendously boosting the global demand and prices of quinoa in recent years. As a result, quinoa has evolved from a local food integral to indigenous people in the Andes, into a burgeoning global food commodity. This transition has positively impacted the welfare of harvesting communities in the Andes and alleviated poverty for many quinoa farmers. By selling their crops on the global market, many quinoa farmers in the Andes can now afford to educate their children and purchase a home. The increase in the demand and supply of quinoa also contributes in reducing the gender gap in harvesting communities, as women are increasingly involved in the farming of the crop. Lastly, the introduction of quinoa into the global market has also contributed positively in increasing the diversity of the global food system, making this highly nutritious food easily accessible.

On the other hand, the quinoa boom has led to raising concerns about its impact on food security in the Andes where the crop is grown and highly consumed for generations in local diets. Increasing global prices for the crop are stipulated to making it unaffordable for the indigenous people in these rural communities where the crop is grown, and as a result promoting the consumption of less nutritious foods.

In addition to this issue of food security, another socio-economic issue linked to the quinoa boom arises from inequalities in north-south economic exchanges. Rural communities in developing countries are typically the most vulnerable participants in the global food system, possessing little power in trade deals, and consequently reaping the least benefits. As quinoa’s place in the global economy rises, Andean quinoa farmers increasingly face unbalanced competition from developed countries such as the United States which increasingly cultivate and sell their own quinoa on global markets. Given the greater production power of such competitors compared to Andean farmers, such competition highly threatens the profits of Andean farmers, and this has resulted in calls for intellectual property rights to safeguard this Andean tradition and natural resource given that Quinoa is recognized as originating from the Andes.

Even among quinoa producers in the Andes, small farmers who previously monopolized quinoa’s production have increasingly faced an unbalanced competition from larger Andean producers with greater resources such as the technology, capital, credit, and geographical advantage compared to smaller producers. The affiliation of these small producers to cooperatives and fair-trade organizations is encouraged as a means to get better prices for their product.

Quinoa is traditionally cultivated using methods of crop rotation and fallow periods, but in order to meet with the tremendous increase in global demand, quinoa farmers in the Andes increasingly make use of less environmentally sustainable methods than traditional ones, such as using chemical inputs and mechanized methods of cultivation. Other changes resulting from the spike in the demand for quinoa include the move from growing quinoa on mountainsides, to cultivating on flat scrub lands previously dedicated to llama and sheep. This change is suggested to contribute towards decreasing the natural fertilization of land formerly enriched exclusively by manure. Lastly, increase in the global demand for quinoa has also encouraged farmers to reduce the crop diversity in favor of growing uniform crops. This reduction in crop diversity impacts the overall health of the ecosystem and negatively affects the environment. This change could also produce less resilient harvests for farmers in the long run.

Given all the critique and praise attributed to the quinoa boom, the sustainability of this food remains a complicated issue. Whether its positive impact outweigh the negative is disputed. Nevertheless, as numerous exotic healthy foods gain popularity as a result of the increasing demand of superfoods, a key lesson from the quinoa boom is that, before promoting traditional foods on fickle global markets, it is important to put in place sufficient institutional mechanisms to protect small farmers and ensure that they retain some control over the product, after the initial boom.

Cleaveland Clinic. (2021, November 10). What Is a Superfood, Anyway? Retrieved from https://health.clevelandclinic.org/what-is-a-superfood/

Ware, M. (2019, January 7). What are superfoods and why should you eat them? Retrieved from https://www.medicalnewstoday.com/articles/303079

Save
2 Thoughts on The Sustainability of Superfoods: The Case of Quinoa

Is it helpful to stop purchasing quinoa in the grocery store due to the controversy of sustainably grown quinoa?

Thanks for that question Marion. In my opinion, given that the boom in quinoa has greatly contributed in improving the welfare of communities in the Andes, I won’t suggest to stop purchasing quinoa as a solution to the controversy. I would rather encourage purchasing Fairtrade Quinoa if that is available to you: https://info.fairtrade.net/product/quinoa. Fairtrade quinoa can be identified using the FairTrade marks https://info.fairtrade.net/what/the-fairtrade-marks#fairtrade-mark.